Well, I know this may not be “breaking news” for some, but I still decided to blog about it… because I find it an extremely curious case. So, we all know, who Gerard Depardieu is… right?

So what is this old Mr. Gerard Depardieu so happy about? I take it that he’s happy for his newly acquired Russian citizenship. 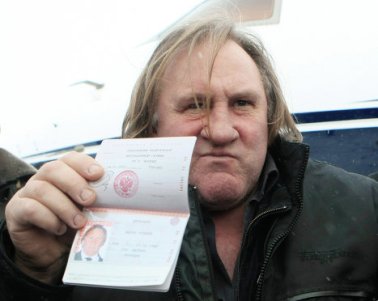 Here we have a photo of Gerard showing off his new, Bordeaux-colored Russian passport, which he received days earlier from President Vladimir Putin.

“I adore your country, Russia, your people, your history, your writers,” he wrote in a letter to Russian journalists, explaining his application for a Russian passport. “I adore your culture and your way of thinking. My father was a Communist in his time and he listened to Radio Moscow! That, too, is part of my culture.”

Making a long story short, Gerard Depardieu has renounced his French citizenship to protest his country’s ridiculously high taxes. Francois Hollande, France’s new President, wanted to raise the country’s income tax on those making more than a million Euros a year to 75% from 41%. As a result, the French actor has decided to swap his French citizenship for a Russian one, due to Russia’s 13 percent tax rate – a heaven, indeed! This proves the fact that absolutely no one likes paying taxes… not even Gerard.

Once Gerard was made a happy Russian citizen, we started hearing stories that he actually wants to move there. This is getting even more and more interesting, right? Not too long ago, Depardieu announced of his decision to move to Russia where he’s planning to establish his new residence in the small village of Saransk, Republic of Mordovia. According to him, he prefers the calm countryside lifestyle. “It’s very beautiful here,” we hear him say upon his visit. When he arrived to Saransk, he was greeted with much happiness and love from the locals. In Russia, Gerard is very much respected by the people, therefore he couldn’t have chosen a better spot! Who wouldn’t like to be welcomed into their new homeland with such enthusiasm? Latest news from Saransk is that Gerard has already bought land for the construction of his house, and is determined to open a restaurant (he already owns several successful restaurants and wine bars in Paris).

His future plans consist of learning Russian, getting involved in agriculture, and even shooting a film in Chechnya! It would be interesting to follow Depardieu’s new life in Russia – so stay tuned. 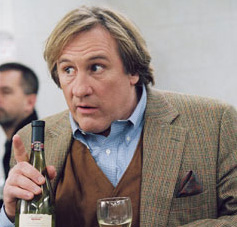 And now… let’s toast for my new compatriot, Gerard Depardieu!

From Russia With Love